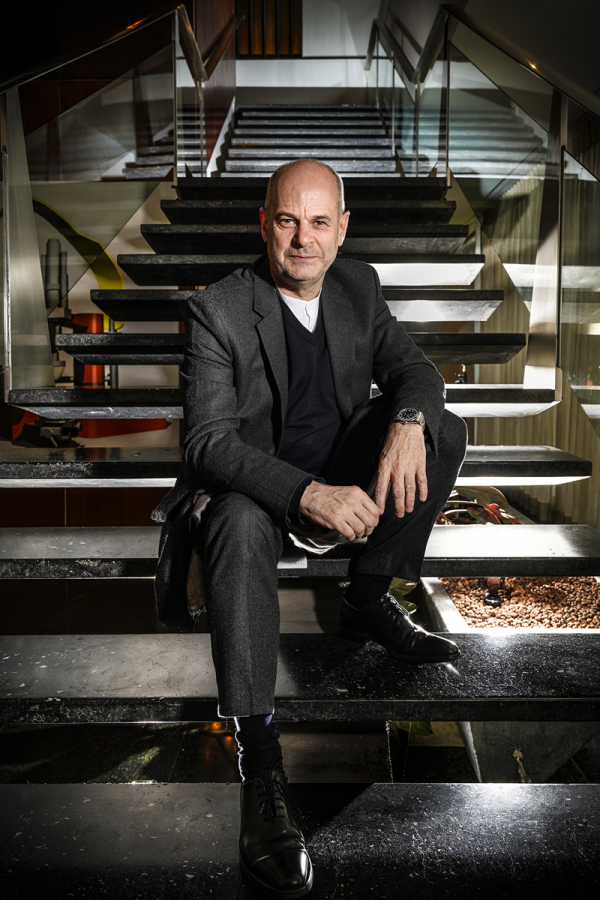 Jean-Pierre Greff is the director of HEAD in Geneva. He is an art and design historian, teacher and curator, and part of the Archipelago steering committee.

Several years ago, he, along with other representatives from HEAD and HEPIA, initiated a long-term vision project, “Pôle des Architectures”, to think about how the myriad design disciplines taught within each school could interrelate and coalesce in new forms. Archipelago is one initiative that arose out of this exploration.

To start simply, how did the idea for Archipelago come about?

The creation of a possible “Pôle des Architectures”—the definition of which remains deliberately vague, provisional and informal—was initiated a few years ago. As far as we are concerned, at HEAD Geneva, this initiative, whose multidisciplinary, even transdisciplinary dimension everyone understood from the outset, could only be envisaged from the moment when HEAD’s academic focus, Interior Architecture, had gained a contemporary definition. Interior Architecture needed a sufficiently strong disciplinary identity not to find itself subsumed, nor swallowed up as a sub-category, as derivative and accessory to Architecture (written with a capital A). Yet, in my view, Interior Architecture only achieved this some four or five years ago. Consequently, the process of imagining Archipelago is based on a simple observation: we have the rare opportunity in Geneva to host, in two “sister” schools, HEAD and HEPIA, the three disciplines and spatial scales of architecture: interior architecture, architecture and landscape architecture. The “Pôle des Architectures”, where the idea for Archipelago began, therefore includes a reflection on a possible institutional harmonization, but even more so on the epistemological and critical categories that underpin each discipline, which are old and obsolete in certain respects. The nested “encapsulation” of architectures and spaces, from the landscape to cityscape, from the built environment to interior spaces, on a human scale—and the scale of values that it inextricably comes with—seems inoperative and a little outdated nowadays. We will certainly come back to this, but the fact remains that we have imagined Archipelago as an intellectual and experimental base from which to think about possible reconfigurations of the field of architecture. In a very practical way, the students of our three departments were invited to collaborate concretely for the past two years in the creation of some of the venues of this new spatial, discursive, multimodal, conversational, horizontal and public programme that we had imagined together, along the Rhône and on the banks of the lake, for Archipelago… before the tidal wave of the pandemic forced us to reinvent it.

Many aspects of Archipelago, from its physical design to branding, have been done in conjunction with your respective schools. How are HEPIA and HEAD uniquely positioned to work on Archipelago and how does the event reflect your larger pedagogical stances?

It goes without saying, in my opinion, that the events supported, desired and produced by the school can only be a result of the teaching and research of the school; these events only make sense if they are carried out by their primary recipients, i.e. students and teachers together. This might actually be a possible definition of an art school. Archipelago is thus an example of a teaching method in which everyone is both an actor and an audience member. It is also emblematic of a school that favours, as much as possible, 1:1 scale projects—i.e. real-life, as opposed to simulations. Our students work for the school itself as well as for its partners and commissioners, on real projects, sometimes complex and from the very beginning of their studies. In this respect, Archipelago was a very desirable opportunity. It also provides an opportunity for transversality, of worlds merging, which is an approach that HEAD favours. Finally, the school’s teachers are involved in research projects, and thinking about their discipline and related issues is part of their daily work; they are also professional artists and designers, so it seems quite natural to put their talent to use, as in the case of Archipelago’s visual identity, created by Mitch Paone and Visual Communication students.

What is the role of the design academy today? What responsibilities does it have and conversely, what are its potentials?

A school of art and design always has political dimensions. This means, first of all, that it is anchored in the city, within which it is a leading figure; that it showcases itself there with actions, in many diverse situations, but also that it welcomes public discussion, centred on discursive issues that necessarily have socio-political implications. It also means that such a school is a forum that seizes all essential issues that run through a society at any moment in its history. A school of art and design has a social responsibility; it aims to reveal and outline new possible worlds, new relationships or, more concretely, to foster good design for a troubled world. A school such as ours, both of ours in this case, has considerable intellectual “firepower”. We are entirely focused on this effort of thought, imagination and reimagination of the world. This is due to the quality of its faculty as well as to the size, diversity and quality of its student body. It is also due to its capacity to engage in dialogue and debates—ones that are driven by intellectual rigour and high ethical standards. Logically, this is expected to produce new knowledge and invention.

Archipelago will be broadcast from Geneva in early May. What is the significance of this point of origin? What does this specific place offer for your schools and for design discourse at large?

There is an old tradition in Geneva, which was put on hold for a while, of reflection and discussion on architecture and education. And then there is the rare situation that I mentioned of two sister schools that have different focuses: one of which is rooted in the history of art and design and the other in a tradition and culture of architecture and engineering, that bring together the three types of architecture aforementioned. The city's appeal is therefore a mixture of physical and institutional proximity and socio-cultural distance, and from this in-between we believe that sparks may fly. To create an electric arc, two electrodes must be neither in contact nor too far apart, but at a very close distance. This might be where we are… At HEAD, as I mentioned, we are constantly looking for collaborations of all kinds. Architecture is very present within the school, not only through its teaching staff, but also because of its buildings, at least two of which feature among the jewels of Geneva’s architectural heritage.

It seems that the work of architects, landscape architects, and interior designers are more blurred than ever, particularly for students and early stage professionals. How do you think about these disciplinary boundaries and to what degree can/should they be challenged?

This is a crucial issue, and for me, for us at HEAD, it is at the heart of the Archipelago project. Architecture has not escaped the vast movement of reconfiguration that has affected the entire design field since the end of modernism. I do not think that designations are only more vague, I think that they are simply much more open. Old boundaries seem to be dissolving, sometimes to the point of disappearing. New intrigues have emerged between architecture, interior architecture and design over the last two decades, challenging and overcoming their old barricades. This is a profound change based on the conjunction of practices and their reciprocal contamination (even though corporatist orders rigorously ensure their social and economic distinction). The question is complex, and I will only touch upon it here. However, the aim for us is not to simply take note of an obvious situation of de-differentiation, nor is it to painstakingly preserve silos in terms of identity and hierarchies. We must resolutely explore a contemporary field, determined by many imperatives. This imposes on all architects (the plural is a must!) the need to take charge of the existing built environment, not to apply a rationale of superficial or decorative renovation (even though ornaments, at times been despised, have undergone a re-evaluation in the field of Architecture), but to re-appropriate it, in the strongest sense of the term, by rethinking, restructuring and requalifying it from within. It is this epistemological change that our Interior Architecture Department intends to explore. Here again, the challenge is to go beyond the old academic dividing lines of “major” and “minor”. The aim however is not to abolish all differences in terms of practical skills or professional realities, but rather to imagine a teaching programme which, by establishing transversality as a practice, envisages contemporary architecture as a fragmented scene, crossed by successive conjunctions and disjunctions, animated by an incessant, exciting and stimulating movement of “deterritorialization and reterritorialization”; a scene which, in short, responds very precisely to the geographical figure and poetic power of the Archipelago.

What has the collaboration between HEPIA and HEAD been like so far? Have there been examples of this in the past?

This collaboration took place very naturally and without difficulty, simply because we were all ready, and because it was not forced but desired. For the students, collaboration is never a problem, they have appetite, availability and a lack of prejudice which makes it spontaneously easy and fruitful. This collaboration between HEAD and HEPIA for Archipelago is on a new scale and with a new ambition, but it is not unprecedented: a previous collaboration for example, enabled the creation of a very beautiful itinerant scenography for DRA IV (4th Distinction Romande d’Architecture).

The elephant in the room is the ongoing pandemic and its effects across all aspects of life. Why plan a festival now and how has Archipelago needed to adapt both in concept and form?

Alas, the pandemic upset all our plans! This project was based on the idea of being together and on new, shared physical experiences of very diverse venues along the water. The pandemic changed the project, but it has not stopped us! It has forced us to completely reinvent the venues and forms of this “festival” and to bring it in a new and radical way into a virtual or hybrid world, mixing reality and virtual reality to the point of dizziness…

What do you hope to see in Archipelago? What should the people watching from home take away and what are the plans for it afterwards?

Our audience will leave stimulated, enthusiastic, radiant. It should encourage restlessness, anger and smiles. It should provoke new questions and new ways of dealing with them. The answers, in the end, may not matter…For the diverse, numerous and dispersed public, shared experiences. Active participation, not the passive listening of experts; this no longer has much hold. For Geneva, a new vision, attention and perhaps, finally, in the face of the flow of new ideas and experiences where new possibilities are glimpsed, the ability not to start conversations by saying “no”. A new interest in an ambitious construction of the city, outside of spectacle. In reality, in Geneva, which features a handful of little-known masterpieces of 20th-century architecture, the culture of architecture is in deficit; this is one of the main reasons why any large-scale architectural project is difficult to implement in this city at this time. For us, HEAD and HES-SO Geneva, it is an invitation to build from this base, to establish the “Pole des Architectures” in a light and flexible way, like an intermediary, pulsating space where two histories and two modalities of architecture may meet, confront and embrace one another.