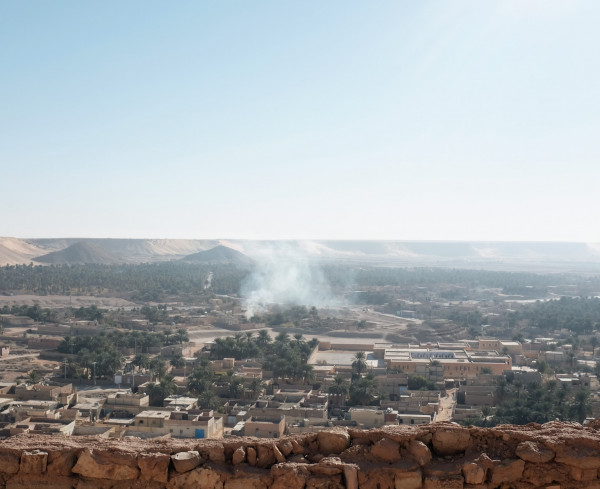 In secular societies, the sacred has all but disappeared from the urban realm. The buildings that embody sacredness — churches, mosques, and other places of worship — are increasingly removed from the city’s landscape, and stand, for the most part, empty. Elsewhere, monuments offer a rigid approach to collective meaning and memory — often shaped by political agendas — but overall, the urban realm in Western cities holds little space for that which cannot be defiled. Could this notion of the ‘un-defileable’ hold a vital significance in the age of climate emergency?

An example can be found in the Algerian desert, in the desert town of Ghardaia. Built on a hill, Ghardaia is an oasis town of brick and packed earth houses overlooking the Sahara. At its base, a few acres of palm trees grow, while at the top, a single palm tree stands across the mosque. For miles, the trees below and the tree above are the only patches of green visible. A few decades ago, the townspeople decided to expand the city outside of its historical walls and build new houses by cutting down the palm grove. In 2008, heavy rainfall resulted in a flood that destroyed hundreds of homes and killed thirty people. The neighbouring town of Beni Isguen, which had preserved the trees growing on its border, was not affected. As a result, in Ghardaia and surrounding towns, the fundamental importance of the palm tree has been re-established. As Muslims, the inhabitants do not worship idols — to them, there is no god but God. Yet the palm trees, if they are not holy, are definitely sacred.

Modern Western cities are just as fragile as this desert town. The only difference is that, for most of them, the flood hasn’t yet happened. However, trying to analogize the example of Ghardaia isn’t an easy challenge. To our secular minds, the sacred is often best confined to those specific spaces called sanctuaries, like churches, libraries or museums. Its attributes fall under what could be called the “library paradigm”: socially isolated, topologically remote, and relatively empty. However, sanctuarizing the access to water or the presence of biodiverse refuges throughout our metropolises cannot be done in the way we preserve knowledge in our libraries.

Sanctuarization has been deployed with relative success, as in the case of natural reserves. It is even gaining traction worldwide, through movements like the 30 by 30 coalition, a platform dedicated to protecting 30% of all land by 2030 in response to the climate crisis. Yet the story of Ghardaia teaches another lesson: to build a sanctuary isn’t to separate it from the urban landscape; it is simply a way to define, collectively, a priority that is absolute. From this perspective, sacredness could be an economic principle: by design, the sacred is what lies outside of the reach of human exchanges. If translated into the language of contemporary architecture, the sacred is outside of the grasp of unchecked real estate development.

This notion is nothing new. Melissa K.Nelson, an ecologist and native scholar-activist, makes a case for the restoration of indigenous stewardship of land and water. “We Indigenous peoples have cultural and spiritual obligations to embody Indigenous ideals of interrelations and to restore the balance between people and place.” From Standing Rock to the Brazilian Amazon, indigenous people have long been leading the fight against extractive and destructive land exploitation. This begs the question: can new forms of guardianship in the urban realm also allow for sustainable practices in our cities?

Consider the Malian mosque of Djenné, another Saharan example: each year, the citizens of Djenné take part in the annual renovation of the building that is made of earth and subject to heavy erosion. Every member of the community plays a part, both in the preparation and the application of the earth daub. Through generations of collective care, the mosque of Djenné is transformed into much more than a holy place: it is a cornerstone for the city’s identity, bringing its members together around a central project. Through the shared guardianship of the building by its people, new possibilities for sustainable practices in the built environment emerge.

Maybe it is time to consider buildings and public space as moving, evolving and living entities, the way a stream, a forest or a field may grow and die, requiring adequate human care. The restoration of a sacred covenant between people and place establishes a framework for the creation of value outside of market price, fostering truly sustainable cities.